A Time for Self Reflection

The complete transformation in the Surrey Civic Election landscape represents a good time to pause for some self reflection. A lot of people worked very hard during the election and didn't get in. Surrey is a big city now and there are only a limited number of seats. It's easier for people to vote in slates and name recognition counts. Yet nothing is for naught.

It's always good to take time out to reflect upon one's mission statement. Lao Tzu says he who knows others is wise but he who knows himself is enlightened. When I first started my blog and website people misunderstood the origin of the name. People thought Gangsters out meant outing gangsters and exposing their true identities. Although that is exactly what we did in the beginning as a response to the heartfelt pleas of a grieving mother, that is not what the name meant. The name meant gangsters get out as in get the f*ck out of my neighborhood.

I have always been clear in that I was never a gang member, drug dealer or a cop. I was something different. Back in the day we never got involved with drugs or prostitution. We simply stopped violent crime. Then when the crack epidemic swept the United States back in the /80's Curtis Sliwa led us to that battle head on face to face. I was never under cover. We were always loud and proud. This is our neighborhood now. Drug dealers get out.

Years later I found out about the Gary Webb story and I thought, you b*astards. Then I found out about the 75th precinct in Brooklyn. We were risking our lives confronting the crack dealers up there in Harlem and down there on the Deuce and they were the ones supplying the crack dealers with cocaine. You b*astards. That is why we need a Molllen Commission in BC.

Nevertheless, after my real name was plastered all over the front page of the local papers and my home address was plastered all over the Internet, I decided to amend my mission statement to put my kids at ease. Someone said your just teaching your kids to stand up to bullies. I responded by saying they will never be able to see it that way in this life. It's time for me to evolve. So I adapted the Kerri Krysko model.

I stopped posting inside tips on crime (for the most part) and simply commented on gang news already in the media. My purpose was to encourage people to leave the life. My exit strategy was simple. If you want to leave the life, don't become a police informant, just leave. That is the safest way for you to move on and leave the life behind.

I still do that but I have evolved yet again like Charmander in Pokemon. Given the political landscape it became time for me to launch Green Justice, a third party sponsor. We post policies and endorse any candidate from any party who embraces those policies. That is who we are and what we do. The purpose is to promote small business, defend civil liberty and implement the New York Crime Reduction Model here in Surrey which is in everyone's best interest.

When I was young my father took me to Paradise Valley and sat me down among the trees. He said look at all these huge trees. Someone planted them before we were born and never got a chance to see them grow to maturity. He then talked about the Mormon pioneers. He wasn't a Mormon but he respected what they did. He said the Mormon pioneers came over in waves. One wave would plant crops and another wave would come later to harvest the crops. Then he said to me plant shade trees under which you know you will never rest.

It was good advice. It was all about casting shadows on the horizon. Being mindful of the footprints we leave behind striving to make this world a better place for the next generation. That's what it's all about. Speaking of which, season two of the Good Place is on Netflix now. Eleanor spent her whole life self absorbed not really caring about anyone else.

Then she meets some friends after she dies and decides she wants to become a better person. They even try to help one of their tormentors try to become a better person so they can all get out of the bad place and get into the good place which is really the same place depending on the way you behave and the company you keep. Tahani spent her life on earth fundraising for charity but she didn't do it to help others, she just did it for the praise of the world. She recognizes that now and is striving to be more genuine and sincere. It's all about aspiring to something higher. 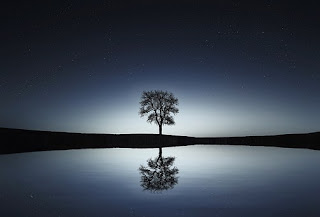