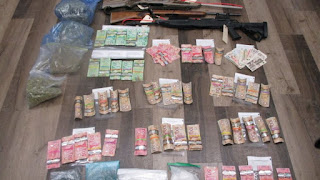 CFJC Today is reporting that "Police in Castlegar have seized a substantial amount of cash and drugs after executing two search warrants at different homes in the city this week. Yesterday afternoon, Oct. 25, Castlegar RCMP executed two search warrants at the same time, at two separate home. As a result, roughly 800 fentanyl pills, 17 ounces of cocaine, one kilogram of cannabis, more than $50,000 in cash, other pills believed to be synthetic drugs, firearms and ammunition. A 65-year-old man, 65-year-old woman, and a 52-year-old man were all arrested."

"The 52-year-old man remains in custody with several drug and weapons related charges pending. The other suspects were released at the scene, according to a news release. Investigators from Nelson, Trail and Castlegar worked together on this search, and police believe this seizure has disrupted a large drug trafficking operation that has been impacting communities in the Castlegar and Trail areas."