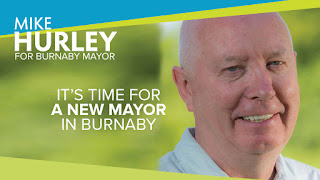 The Daily hive is reporting that "It is the end of an era in Burnaby, as Mike Hurley has been elected by voters as the city’s new mayor. A newcomer to the city’s political scene, Hurley will take over the city’s top job from longtime mayor Derek Corrigan, who was elected mayor in 2002, 2005, 2008, 2011, and 2014. The result comes just days after a poll was released showing that Hurley had a very real chance of winning the mayor’s chair. 'At the doors, Burnaby residents are telling us that it is time for change,' said Hurley."

So Translink will lose its new Mayor's council chair it bought. Derek Corrigan replaced Mayor Moonbeam as the Mayors council chair talking the talk on fiscal responsibility. Then they gave him a trip to South Korea for the Olympics and he changed his tune. He drank the poison kool aid and fell from grace. That's what happened. Joe Keithley elected to Burnaby city council.

I am disappointed that Kennedy Stewart edged out Ken Sims for mayor of Vancouver but I am happy Vision Vancouver has been wiped out and council has been replaced with Green and NPA. That's actually a healthy balance so it is. Green Justice. Unfortunately, Norm Farrell just missed out on North Vancouver school trustee. Two of the four independents running for West Vancouver council on the yoursmineours.ca website were elected.

No kidding. He is powerless. He has no party and no councilors. That means the NPA and the Green control the city now. Kennedy Stewart is just their public relations spokesperson.

Posted by Dennis Watson at 9:53 PM