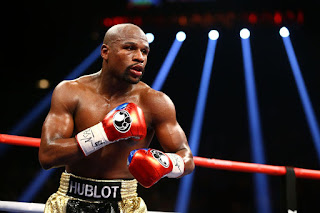 The Score is reporting that Floyd Mayweather may again be lured from retirement for a potentially big payday against a UFC fighter. The undefeated (50-0) Mayweather says a fight against undefeated lightweight UFC champion Khabib Nurmagomedov (27-0) is "happening," according to Brett Okamoto of ESPN. Khabib recently called out Mayweather in an Instagram video alongside Leonard Ellerbe, CEO of Mayweather Promotions, saying there can be "only one king." Mayweather seems to have accepted the challenge.

"We're fighting," Mayweather told TMZ Sports. "I'm my own boss. I can't say what's going on on Khabib's end, but on my end we can make it happen." That would be interesting. There's no need to fight Conor McGregor after his defeat to Khabib. Right now McGregor is dead in the water.