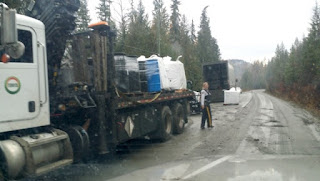 Last Wednesday CFJC reported that there had been a large police presence on Trinity Valley Road between Lumby and Enderby in what appeared to be a huge bust and wondered why the police had not gone public with the information. A local witnesses claimed a window of an SUV was shot out, and a man was pepper sprayed.

Castanet reported that "Little information is being released on what some are saying is a massive meth lab on Trinity Valley Road. Castanet received tips of a large police presence in the rural area earlier this month, but officials have yet to provide comment. A witness, who asked to remain anonymous, said truckloads of chemicals have been going out of the property for a week."

This is why the police's decision to take their scanners off the grid is not in the public's best interest. If there has been a shooting or a meth lab bust, the public need to know about it. The public are the ones that pay the police's salaries. Maybe Vernon needs it's own police force as well. One that's accountable to the public. The RCMP isn't and they're compromised.

Castanet is reporting that "In 2014, RCMP were called to a home in the Trinity Valley Area following a report of shots fired in the area where they discovered a drug lab." Is that what happened here? The police responded to shots fired and stumbled across a meth lab they were forced to deal with? As we know the compromised BC Gang Task force stopped making Hells Angels drug arrests after the Kelowna Summer Jam in 2012 when the OMGU was disbanded.

In 2012 the police raided a meth lab run by the Hells Angels on Postill Drive in Coldstream outside Vernon which was described by police as a major production point for the Valley.

Posted by Dennis Watson at 9:19 AM