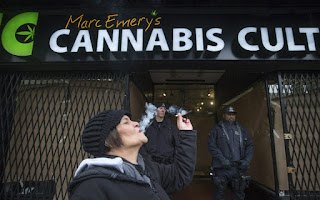 "Tim Humberstone, a former law enforcement leader and respected expert in Canada’s regulated cannabis sector is joining Spire Secure Logistics, a company specializing in security, intelligence, and compliance. As Chief Strategy Officer, Tim will lead Spire’s growth in Ontario and support clients across Canada with his depth and breadth of specialized knowledge and relationships."

I'm a little bit confused. Andrew Richards is a local rock star. People call him Andy but I get the feeling he prefers to be called Andrew. I don't like some of his friends but Andrew is competent. His pal JD Hawg is a complete sleazebag but I won't get into that. Much.

The reason I'm a bit confused is that this announcement comes right after Kim Bolan wrote that article about Weird Hal Porteous advertising on Facebook to help people get Medicinal grow op licenses. Now I hear vague references claiming Weird Hal is no longer a member in good standing. I am suspicious to say the least. Andrew was Kim's source for her article.

I have no problem with the Hells Angels being involved with legal pot. I never did. I had a problem with them trading all the BC Bud for cocaine in the US and bringing it back to Canada to be sold here as crack. That was my concern. If the Hells Angels want to make money from legal enterprises then feel free. I won't stop them. Cops getting involved with legal pot is a little bit conflicted but hey, it's a free world. So we are led to believe.

Jodie Emory has Tweeted her concerns about cops cashing in on legal pot while she and her husband are still being tormented by them. "Kash Heed, former B.C. solicitor general and former West Vancouver police chief, is a strategic consultant with National Green BioMed, which has applied to grow medicinal marijuana near Mission. The company, which recently gave $1 million to the University of B.C. to to study the therapeutic effects of cannabis, is chaired by Herb Dhaliwal, a former Vancouver MP and federal cabinet minister."