CIA caught meddling in US election 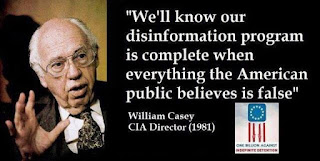 CNN is reporting that "Republicans on the House Intelligence Committee announced Monday they found no evidence that the Trump campaign colluded with Russia and that they are shutting down their yearlong investigation. The committee's Republicans are also disagreeing with the intelligence community's assessment that Russian President Vladimir Putin was trying to help the Trump campaign over Hillary Clinton, a notion that aligns with President Donald Trump's viewpoint on election meddling."

Once again the source of the fake news has been revealed. This insane obsession with the ridiculous notion that Russia hacked the US election is coming from the CIA. The CIA is once again in a conflict of interest.

As Jesse Ventura pointed out the CIA are not authorized to operate on American soil. The CIA are the ones that supported Hillary Clinton over Donald Trump because Hillary Clinton was the author of Operation Fast and Furious. A CIA Operation tied to the ATF that was caught selling the Mexican cartel guns and bringing back tons of cocaine into the United States as payment.

The question we must ask is why in God's name are we listening to the CIA about anything? They have been deeply involved with drug trafficking since Iran Contra. All they do is lie. When the MSM keep blindly printing every ridiculous press release the CIA sends out, they destroy their own credibility. Operation Mass Appeal was no different. The CIA is a criminal organization far worse than the Hells Angels ever were.

Instead of focusing on real news like the continued execution of political prisoners in Communist China for organ harvesting, the MSM blindly focus on a cheap whore that has absolutely no relevance whatsoever. Welcome to the Brave New World of absurd propaganda.