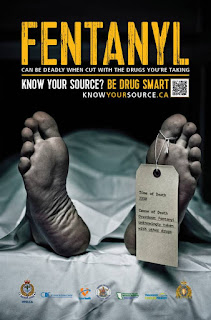 The Peace arch News is reporting that "Azam Kabani and Shervin Beeharry, both 19, have been charged with trafficking a controlled substance. Japmanjot S. Grewal, 21, of Calgary, has also been charged. According to Saskatoon Police, the charges are connected to a March 11 public safety advisory where police warned people to stay away from dealers going by the names “Lil Joe” or “Joe Bro,” as well as anyone using the phone number 306-881-7300. Police said that any cocaine purchased from the dealers might be laced with a lethal amount of fentanyl. The public advisory came after police investigated six overdoses within 24 hours. Two people died and a third was unresponsive and receiving medical treatment in hospital."

It's pretty sad that Ontario and Saskatchewan are charging fentanyl dealers but BC isn't. In Surrey and Vancouver the police give the fentanyl dealers police protection in the DTES and on the Surrey Strip. Kinda makes ya wonder which side they are on. In BC all they want to do is seize the proceeds of crime in exchange for letting it continue unbridled.