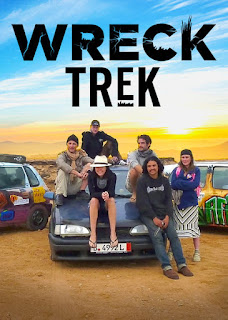 I just powered through a TV series on Netflix called Wreck Trek. It only had a two out of five star rating and I had to fast forward through all the toxic drama but the original quest was somewhat interesting. Six people bought three junker cars from the scrap yard and drove them all the way from Berlin to Capetown, South Africa.

I was somewhat shocked and disappointed they threw Lucy under the bus in the last episode. Lucy was rock solid the entire trip. Throwing her under the bus like that was uncalled for.

Lucy was from Sydney. Australians are rugged and fun to be around. I have never met an Australian that I did not like. The mission was spearheaded by an American named John Lovejoy. He obviously had skills for putting the whole thing together but his unrealistic expectations and unending critical comments became toxic.

At one point Lovie said the Australian accent sounded like rednecks and it may have offended Lucy. Ya just got to remember that sometimes the Americans talk sh*t and they don't really mean it. They're just joking. White Americans sound like rednecks not Australians. Everyone loves the Australian accent. When I was in New York I had a long goatee and one of the guys called me Colonel Sanders. I just looked and him and the guy's looked at me and I knew I had to do something or that name would stick and they would eat me for breakfast. The guy's street name was Dragon. I really liked him. Every time he called me Colonel Sanders I called him lizard instead of dragon. He stopped calling me Colonel Sanders pretty quick after that.

The British do it too. They like to take the piss out of people which means mock them. It's just sarcasm. It was however, sad to see everyone trash Susan all the time. Susan is a wonderful person. Everyone kept saying Susan is stupid and Susan is a bad driver over and over again. It was just plain toxic. Lovie was the most vocal about Susan's driving. Yet he crashed his car twice and Susan did not. Susan helped keep everything together.

Both of the girls were absolutely rugged. They made it all the way through the Congo on those dusty roads with a broken window. Dust was everywhere inside the cars and all over them. They were both rock solid rugged. You have to give credit where credit is due. Negative reinforcement just isn't healthy. You can disagree with someone or confront evil but trashing them just for the sake of trashing them is toxic. You don't feel good about yourself so you have to cut someone else down? You can never build a healthy self image by tearing down others.

Jonathan was from England. He was a good bloke so he was. The fact that the could speak French was a huge asset. It looked like Lovie was a bit jealous of his ability to speak French and kept complaining that he should just shut up when talking to locals. Yet having him in some of the French speaking countries they went through after he left would have been a big help. When you are driving through the middle of nowhere and start speaking English to random people expecting them to know English is a bit rude and unrealistic.

Rob was a really good guy too. It was sad that after one of the cars died the series became kind of an episode from survivor where two people had to be cut. That just fostered the negative criticism. Tony was the resourceful mechanic. He admitted near the end while he was complaining about Susan that it was like having to put up with your girlfriend without getting any. It's pretty obvious Tony and Lovie were wanting to get laid. Lovie was choked Lucy kept talking to her boyfriend on the phone near the end. She missed her boyfriend. That's pretty normal.

Sharing a room with an attractive young women without getting any is enough to drive any normal man insane. Next time take your girlfriend so you can relax and have fun without being so obsessed with a crazy timetable. When I do my trek across Canada and the US on my motorcycle it's going to be leisurely and I'm going to take lots of pictures. That's why I'm going alone. No drama. Just enjoying the beauty of nature and the Zen of the moment.