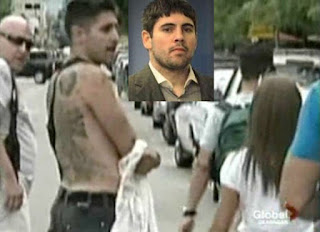 Kim Bolan is reporting that James Riach has received a life sentence in the Philippines for trafficking cocaine, crystal meth and ecstasy. That's too bad. I liked the Gingerbread man. Kinda bizarre how they refer to him as high profile and the Bacon scum as notorious. James Riach is a lot more notorious than the pig sh*t will ever be.

Obviously I don't support drug trafficking. However, James wasn't as bad as the others. It's like those young girls from Quebec sentenced in Australia for cocaine smuggling. Their life is gone now. Giving them a huge sentence won't stop the people they were working for. Will James Riach's harsh sentence be a deterrent for others to traffic drugs in foreign countries? Perhaps. It's a hard lesson to learn so it is. Crystal meth is a horrible drug.