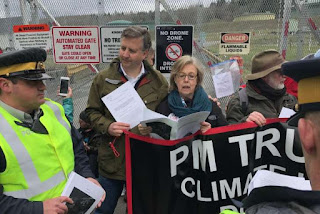 Global is reporting that "Two Members of Parliament have been arrested at the Kinder Morgan facility on Burnaby Mountain after they defied a court injunction that banned protesters from disrupting construction work at both Trans Mountain terminals. Saanish-Gulf Islands MP and Green Party leader Elizabeth May, and Burnaby South NDP MP Kennedy Stewart joined several dozen protesters and marched to the gate of the Kinder Morgan tank farm."

Saturday protesters defied the court order on Burnaby Mountain and were arrested. Tuesday, 59 protesters defied the court order and were arrested. The Globe and Mail reported that "Amina Moustaqim-Barrette, who spoke on behalf of a coalition of demonstrators under the banner Protect the Inlet, said each protester was ready to be arrested to send a clear message against Kinder Morgan’s Trans Mountain pipeline expansion project. “The community isn’t going to lay down and just accept that this pipeline is going to be built,” she said. “They’re going to show their opposition very loudly and very purposefully.” Twenty-eight demonstrators began blocking the entrance to Kinder Morgan’s work site at about 10 a.m. Saturday. Four hours later, some of the protesters tied themselves to the gate using zip ties, Moustaqim-Barrette said." 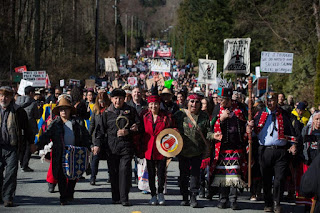 The Seattle Times reported that "Thousands of demonstrators marched Saturday to speak out against a pipeline expansion project that would nearly triple the flow of oil from Canada’s tar sands to the Pacific Coast." As did the Toronto Star. CBC is reporting that "The governor of Washington says his state is "allied'' with British Columbia in questioning whether the Trans Mountain pipeline should be expanded." I told you this project is dead in the water.

King 5 News is reporting that "About 30 kayaktivists with the group Mosquito Fleet surrounded a large oil barge near the Port of Seattle and held a large banner that read Stop Kinder Morgan." 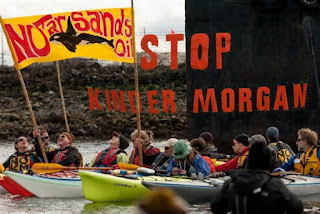 Evidently Alberta's BC wine boycott and their second unjustified spike in gas prices at the pump hasn't deterred the public opposition it has only fanned the flames of indignation. One reader wrote into the paper and nailed it. The second pipeline is not for local consumption, it is for foreign markets in China. There is absolutely no justification for the two recent spikes in the price of gas at the pumps. The problem is tar sands sludge and petroleum coke.

Alberta could refine the tar sands sludge there and send the refined oil through the existing pipeline. They want a second pipeline to send raw unrefined tar sands oil without refining it. Nobody in the US wants it. Detroit and Chicago both held public protests about their mountains of petroleum coke that was a byproduct of refining the tar sands sludge. They were able to send their petroleum coke to India but India doesn't want it any more so we are going to have to talk about what will happen to it. We don't want it in Vancouver. Alberta making demands of entitlement without addressing our concerns is bad business.