Jagmeet Singh explains the history of religious persecution in India 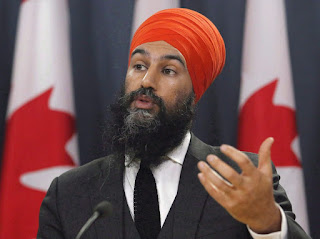 The Globe and Mail ran a very interesting article by Jagmeet Singh about the history of religious persecution in India. It is indeed thought provoking. There is a lot of hype about terrorism.

Recently I made a blog post about a beautiful picture I saw in Guildford Mall of the Sikh Golden Temple in India. Ironically it was just after Justin Trudeau's visit. In Jagmeet Singh's recent article he talked about how the government of India attacked the Golden Temple in 1984 and destroyed it. I had no idea. Where was I in 1984? That was just before I went to New York.

ThoughtCo posted a timeline of the 1984 attack on the temple called Operation Blue Star and the Sikh Genocide by order of Prime Minister Indira Gandhi. An injustice to one is an injustice to all. Taking up arms to defend religious freedom is justified. Blowing up innocent civilians is not.

Kim Bolan wrote a book about the Air India trial called Loss Of Faith: How The Air India Bombers Got Away With Murder. She failed to mention the fact that CSIS provided the explosives for that attack. That was reported by CBC and the RCMP. That's a pretty important detail to leave out. If there was no bomb, there would have been no attack. CSIS has yet to be tried for that murder.

Although CSIS is actively removing the original CBC documentary from Youtube The Globe and Mail also ran the same article: "Canada's spy agency did everything it could to keep the Air-India mass-murder case from coming to trial in order to cover up the involvement of an agent in the plot to blow up the airplanes, an RCMP officer says in newly released court documents."

In 2015 Conservative MP Wai Young admitted CSIS knew there was a bomb on the Air India plane that later exploded in midair, killing 329 people. He claimed the laws at the time prevented the Canadian Security Intelligence Service from telling the RCMP about the explosive device in June 1985. That is ridiculous. They were under a legal and moral obligation to tell the RCMP about the bomb. Then they erased wire tap evidence implicating them.

The Globe and Mail named Surjan Singh Gill as the CSIS agent that helped plan the attack. The Globe and Mail also confirmed that "A Sikh separatist suspected of being a CSIS mole in the Air-India conspiracy had the explosives and airline tickets with him shortly before two bombs were allegedly checked onto flights at the Vancouver airport, an RCMP officer stated in an affidavit."

ABC Reported that "Surjan Singh Gill was the founder of the so-called Khalistan consulate in Vancouver in 1981, and one of the first supporters of the Babbar Khalsa group. He allegedly became Parmar’s right-hand man in 1982, and Canadian agents tailed Gill as he escorted Parmar to a ferry terminal in 1985. Parmar was allegedly on his was way to see a bomb demonstration." Just like how CSIS used Grant Bristow to create the Heritage Front.

The Corbett Report confirms that Air India was a CSIS job. "How did Surjan Singh Gill have the ability to found the group that carried out the bombing, deliver the bombs, pull out of the plot just before it took place, get on the RCMP list of main suspects, and avoid even being brought before a court of justice?" CSIS can keep deleting articles from the Internet but truth crushed to the earth will rise again simply because no lie can live forever.

There is a New Movement Rising in Canada so there is.