Vancouver Mayors Glutton Council give themselves a raise before election 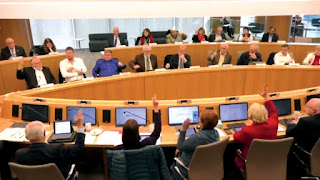 This is further evidence the Mayors Glutton Council needs to be disbanded. Aside from being a duplication of services, all they do is think up ways to raise taxes so they can spend more money on themselves. The Vancouver Courier is reporting that "The Lower Mainland’s municipal leaders are taking some heat after voting themselves a surprise golden handshake. On Friday last week, the Metro Vancouver board voted to give themselves a 15 per cent raise, and as part of the same motion create a retirement allowance giving outgoing directors a lump sum payment of $1,100 per year they have served retroactive to 2007. Dermod Travis, executive director of the watchdog group Integrity B.C., said elected officials’ remuneration should be set by an independent body."

Outgoing Mayor Moonbeam Gregor Robertson and Surrey's Linda Hepner, the tax and spend Queen of Botox, obviously led the way voting in favor of the raises. The Mayor's Glutton council is a duplication of services. Discussing Regional issues is the Provincial government's responsibility. As one reader pointed out, New York City with a population of over 8.5 million has a single Mayor. The population of Surrey is 472,000.

Manhattan, Brooklyn, Queens, the Bronx - they don't each have their own mayor. Brooklyn alone has a larger population than Metro Vancouver combined. Per capita Canadians aren't getting nearly the bang for their buck from their civl politicians that New Yorkers are.

Posted by Dennis Watson at 4:49 AM