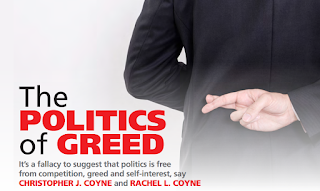 I'm going to keep hammering home the fact that there is a new movement rising within Canada. It addresses greed and corruption on the right as well as the left. Last night I had a very disturbing conversation with Jarup Brar on a telephone town hall meeting he hosted. I was shocked and dissappointed to hear him promoting a Neo Con lie. Who fed him the poison kool aid?

Brian Mulroney had his Airbus and the GST. Stephen Harper had his insider trading jets and the HST. They were both conflicted. The Oliphant Commission concluded that Brian Mulrony acted in an inappropriate way when he accepted large amounts of cash from Karlheinz Schreiber over the airbus scandal which has just been resurrected with Airbus' recent acquisition of Bombardier. Details of the Mulroney fraud were itemized in Stevie Cameron's book On the Take: Crime, Corruption and Greed in the Mulroney Years.

No doubt Stevie Cameron could write a sequel about Crime, Corruption and Greed in the Harper era. Lockheed Martin is as dirty as SNC-Lavalin. Boeing is a much better business model.

Fast forward to 2018. Like Mulroney and Harper, Dianne Watts and Linda Hepner have their own insider trading scam: the LRT. Light Transit is for rural areas not dense city centres.

There is talk about Surrey being the city of the future. Locals have amended that motto to read Surrey: The Future Dies Here because of the Dianne Watts / Linda Hepner fraud. Reverting 104th Avenue to a single lane of traffic in either direction with an on ground train ruining down the middle is not progress. It is an obscene fraud that takes massive amounts of tax dollars and puts it into he hands of campaign contributors just like they did at Campbell Heights.

Right now the bus ride between Surrey Place Mall and Guildford is a problem free five minute ride. The status quo functions perfectly. Surrey Blogger Laila Yuile pointed out the problem is between Surrey Place and Newton. That is where the problem lies. If you want to extend Skytrain to Newton feel free but don't waste billions of tax dollars on a project we don't want or need just so your campaign contributors can get rich at taxpayers expense.

I did however have a very posative meeting with my MLA Gary Begg who I did vote for. He held an open house and met one on one with constituents. I overloaded him with about 30 issues at once but he was very knowledgeable about the problems outside the Front Room along 135A Street and many other issues that affect Surrey. His business card lists him as the Party Whip. Perhaps he will be able to convince the party to fix the BC Hydro Fraud Gordon Campbell created that Norm Farrell keeps talking about. Maybe they'll even bring back the OMGU.