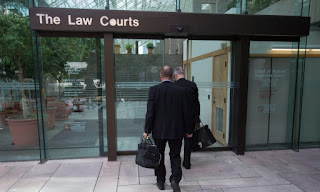 Keith Fraser is reporting that "A judge has found that a man accused of conspiracy to commit murder and attempted murder had his rights violated following his arrest by Vancouver police. Knowah Ferguson of Hamilton, Ont., was charged with trying to shoot and kill Hells Angel Damion Ryan at the Vancouver airport on April 10, 2015. The allegation is that he approached Ryan while Ryan was seated at a table with an Asian male in a food court at the airport and pulled out a firearm. There was a clicking sound and the gun failed to fire, according to a ruling on the rights violation. All three people at the scene then took off running, according to the ruling."

As we know, Damion Ryan became a member of the Ontario Village Idiots until the Quebec brothers disbanded them. Kim Bolan is reporting that Damion Ryan is now living in Greece where the Edmonton scum bags ganged up on a local father and beat him to death.