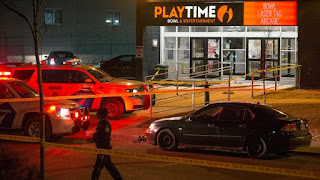 CBC is reporting that "A man in his 30s and a woman in her 20s are dead after a shooting at North York bowling alley on Saturday night. The man was pronounced dead at the scene while the woman died of her injuries in hospital later, Toronto police said in a news release on Sunday."

Global is reporting that the shooting took place inside PlayTime Bowl and Entertainment, located on Samor Road near Dufferin Street and Lawrence Avenue West, at around 10:10 p.m. on Saturday. "It’s not clear where exactly the shootings occurred, but the windows at the front entrance of the bowling alley were heavily damaged by gunfire." The bowling alley was full of families at the time of the shooting.

Update: The Canadian Press is reporting that the woman was a bystander in the shooting.