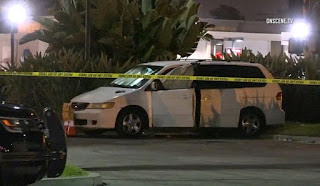 ABC is reporting that "A homeless couple and their two young children, all dressed for bed, were found dead from suspected carbon monoxide poisoning in a parked van that had its windows covered with blankets and a shade to block out the light outside a Southern California strip mall, police said Friday. The case comes as Southern California grapples with a rise in homelessness amid soaring housing costs." Sound familiar? This tragedy happened in Los Angeles.

Housing is very expensive in any big city - LA, New York, London, Toronto and now Metro Vancouver. Homelessness and drug addiction are two separate issues. Here in Vancouver they become blurred because the police do nothing to stop the predatory drug dealers from exploiting the homeless. As we have said before, 50 % of drug addicts on the Surrey strip want to get treatment but can't. Other than Price Pro all the treatment centres in Surrey are just drug houses where addicts do drugs. If the police won't arrest drug dealers for selling drugs in public or at treatment centres, what good are they?

We see homeless here and meet people living in cars all the time. It's always heart wrenching to hear of families with young children homeless but the same goes for the elderly. When the elderly are homeless we are all diminished.

The City of Surrey held a survey about housing in Guildford. They were of course pushing high density towers their campaign contributors can get rich off of. A million dollars for a tiny condo in a huge tower at Surrey Central is insane. Low rise apartments and townhouses for young families are a much better fit for Guildford. Affordable housing is a genuine concern for everyone.

If you want to build more housing in Guildford, take your LRT and cram it up your a*s.