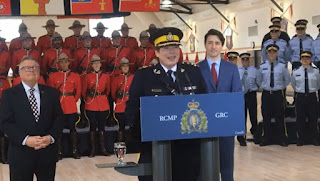 It comes as no surprise that Justin Trudeau has appointed a woman to help cover up or move past the generations of sexual harassment at the RCMP. It's probably a good thing. That is one problem that desperately needs to be fixed. However, there is another problem that has yet to be addressed - organized crime.

The Huffington Post is reporting that "The force has continued to face embarrassing revelations about sexism and sexual misconduct in RCMP ranks, even one year after commissioner Bob Paulson apologized for discrimination against female officers and agreed to a $100-million settlement of two class-action lawsuits."

In BC we are well familiar with the magnitude of sexual misconduct within the RCMP. The Friends of Craig Callen (FOCCers) as they were known locally kept getting promoted amidst continued allegations of sexual misconduct. Bill Fordy wasn't corrupt. He was just an idiot that cared more about getting laid than he did about doing his job. Bob Paulson, Bill Fordy and Craig Callen went on a "fishing trip" at a resort on Pitt Lake and they didn't bring their wives.

Bob Paulson worked on the Pickton case. He was in charge of the witness protection of Dianne Rock. Unfortunately he was too preoccupied with his partner to believe Dianne Rock's claim of being gang raped on the Pickton farm by bikers and cops so she left protective custody and ended up dead. The Catherine Galliford case was settled out of court along with a gag order.

In Bob Paulson's exit interview he admitted that during his tenure as RCMP Commissioner he took every officer in charge of investigating organized crime off of organized crime and put them on the bogus terrorist creation unit that loses billions of tax dollars from it's budget every year to bribe and threaten former drug addicts into performing terrorist attacks.

Since it is clear that the RCMP refuse to investigate organize crime, it is time we gave that jurisdiction to someone who will. The only difference between BC and Quebec when it comes to corruption is that Quebec has a task force that investigates organized crime while BC does not.