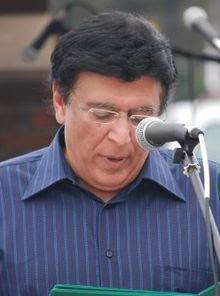 The Toronto Star is reporting that "Former Mississauga-Streetsville MP Wajid Ali Khan has been charged by the RCMP in a $1.1 million international investment fraud" in Pakistan. Khan made headlines in 2007 when he left the Liberal Party and crossed the floor to join the Conservatives, then left politics for good in 2009." He was charged with violating the elections act in 2007.