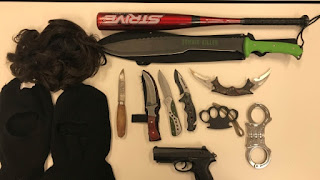 CBC is reporting that "Metro Vancouver Transit Police have caught a man with a Canada-wide warrant and found a stash of suspicious items in his vehicle during a routine patrol. According to police, Albert Edgar Fontaine, 42, was pulled over in the 100 block of 132 Street in Surrey on Feb. 5 because his vehicle did not have proper insurance. Fontaine provided an alias and a fake ID, but officers discovered he had a Canada-wide warrant and took him into custody. After the arrest, it is alleged that numerous knives, a machete, a baseball bat, a wig, ski masks, handcuffs, a set of brass knuckles and a replica handgun were found in the vehicle, according to police. Fontaine's warrant was related to charges of kidnapping and use of an imitation firearm in 2016 in Penticton. He is also a suspended driver who is not allowed to own weapons."

lol the replica handgun was an airsoft pistol according to Global. The machete is pretty nasty but this is obviously just a thugs night out. No real firepower at all. The wig is interesting, It kinda looks like it was for a drag night out yo. The Transit police caught this guy in Surrey because he had expired insurance. He's clearly not a brain surgeon. Too bad the BC gang task force is as compromised as the EPS. Too bad they won't lift a finger to stop the fentanyl coming out of Shakerz supplying the Surrey Strip. Kinda makes all their press releases look fake.