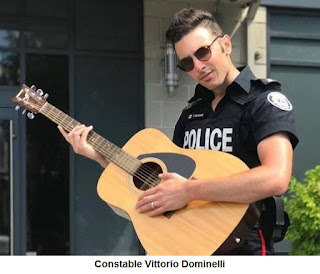 CBC is reporting that "Two Toronto police officers who allegedly ingested marijuana edibles, hallucinated and called for help while on duty Sunday have been suspended, CBC News has learned. Over the weekend, Toronto police carried out a raid at Community Cannabis Clinic, a marijuana dispensary at St. Clair Avenue West near Dufferin Street. Sources tell CBC News the marijuana edibles the officers ingested are believed to have come from this dispensary."

I Heart Radio is confirming that "Two Toronto Police officers have been suspended after allegedly getting high while on duty after consuming marijuana edibles stolen during a dispensary raid."

The Toronto Sun is reporting that "Two Toronto Police officers have been suspended in a story that includes accusations of eating seized pot edibles, tree climbing and hospital visits, too. One officer was allegedly flying so high, he ended up in a tree. Const. Vittorio Dominelli, a 10 year veteran, and Const. Jamie Young, who has been on the force for two years - complained of hallucinations, according to a police source."

The same thing happened in California. After a raid on a pot dispensary in Santa Ana, the police started chowing down on pot edibles. The police association applied for a restraining order banning the video from being released but a judge denied their application. Here's that video.