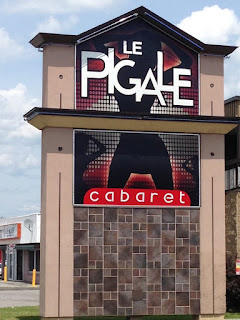 CBC is reporting that "Gatineau police are investigating after a strip club was hit with a hail of bullets Saurday evening. Police say that at around 7:30 p.m., shots were fired at Le Pigale from a car driving by on Gréber Boulevard. Officers found bullet holes in the side of the building, police said. At 9 p.m., major crime investigators were still on the scene. No injuries have been reported. A stretch of Gréber Boulevard was closed Saturday night near Le Pigale for the investigation. The strip club, however, remained open."