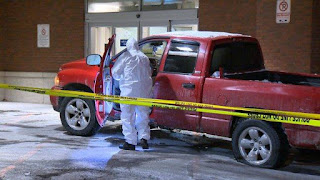 The Brantford Expositor is reporting that "Brantford police are investigating a fatal shooting that occurred near Brantford General Hospital late Monday afternoon. Police were called to the area of St. Paul Avenue and Terrace Hill Street at about 5:35 p.m. They were sent there to investigate an adult male who had suffered life-threatening injuries, police said in a statement. The man died in hospital. Police did not release the man's cause of death but Brantford General Hospital officials said a lockdown at BGH Monday was the result of a fatal shooting." Global is reporting that "the shooting happened near a Rexall pharmacy located close to the hospital."