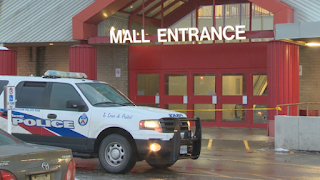 CBC is reporting that "Two people were shot in a north-end Toronto plaza Monday afternoon while others shopped nearby, forcing a lockdown of the shopping centre and a hunt for a male suspect who fled the scene in a white, four-door vehicle. Police were called to Lawrence Square Shopping Centre, at Lawrence Avenue West and Allen Road, around 3:25 p.m. for reports of multiple gunshots resulting from an altercation near the mall's north entrance."