Gas Fraud Soars: Time to take back the monopoly 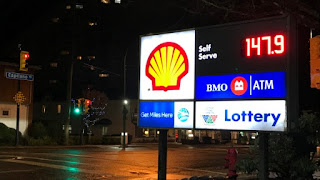 CTV News is reporting that "Gas prices have spiked in parts of Western Canada this week, with some stations in Metro Vancouver charging $1.46 per litre on Friday. Soaring prices stunned commuters and analysts, leaving the latter confused over the timing of the spike."

There is nothing shocking about the fraud spike. Corporate monopolies are never a good thing. They will charge consumers whatever the market can take. CBC is reporting that "Vancouver has traditionally been subject to the highest prices for gasoline anywhere in North America and this certainly is the case today," said gas price analyst Dan McTeague.

It's like the price of hockey tickets in Canada compared to the US. It's the same hockey league. They charge more here simply because they can. Many years ago, when John D. Rockefeller's Standard Oil used hostile take overs to obtain a monopoly on the oil industry in the US, the Supreme Court cited anti trust laws and deemed that monopoly illegal. Times have changed. Now dirty politicians line their pockets with campaign contributions and say corporate monopolies are good. No they are not. They destroy the free market and the democratic system.

Corporate monopolies are also bad in the News industry because they destroy the freedom of the press. Today the Post Media News monopoly was working overtime on the propaganda in more ways than one. They cited one "analyst" and said we just have to get used to the spike in gas prices trying to brain wash us into submission. No we do not. We could do what Norway did and nationalize our oil. That would make sense. The only time a corporate monopoly is good is when the consumers are shareholders in that monopoly. What we have now is NOT a free market.

Allowing the oil companies to form a monopoly was bad enough. Giving that monopoly to Communist China was even worse. It's time to stop the fraud and take back the monopoly once and for all just like Norway did. That would be in consumers and taxpayers best interest.

What Canada and Alberta could learn from Norway