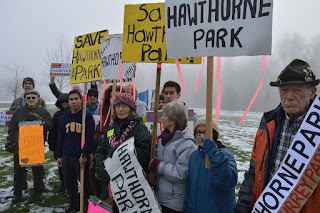 Vancouver Media Scoop is reporting that "Local community activist and teacher Roslyn Cassells today won an early court date to demand the City of Surrey do their duty towards wildlife and the local ecology in the hotly disputed Hawthorne Park road construction project, which would bisect the north Surrey nature park putting lives and habitats at risk. The case for injunctive relief will be heard in New Westminster Supreme Court on Monday Jan. 8 at 9:45 am."

December 29th the Surrey Now Leader reported that "A Surrey woman filed a petition in B.C. Supreme Court Friday asking the court to halt the City of Surrey’s controversial plan to build a road through Hawthorne Park." Roslyn is an animal rights activist from the Green Party who successfully obtained a court injunction against them killing rabbits at UVic.

Meanwhile, back on the ranch, the Surrey Now leader is reporting that "A Surrey residents’ group fighting against city’s hall’s plan to run a connector road through Hawthorne Park in North Surrey staged a protest Wednesday as work crews set up a fence inside the park as a precursor to the project getting underway." The fight has just begun.

Logically, stalling off the destruction until the City has a new election would be in everyone's best interest. That would be fair. Linda Henperer's approval rating is at an all time low and is determined to continue to steam roll over the democratic will of the people in favor of campaign contributions from dirty developers. The real problem is the insane plane to put an LRT down 104th Avenue reverting 104th to a single lane each way. That will be an infrastructure nightmare.

However, Hawthorne Park is Surrey's Clayoquot Sound. There are a lot of people prepared to get arrested for their beliefs. Things are going to get tense. You cant keep steam rolling over the democratic will of the people forever. At some point the people will say enough is enough and that time has finally come. Give your head a shake and Stop the Insanity.

The headline in today's Surrey Now Leader reads "This is a road to nowhere."