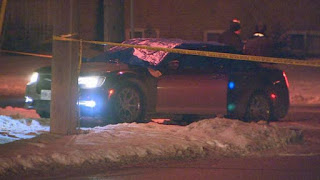 CBC is reporting that "Two Calgary men are dead after a shooting in Toronto's west end on Friday. Toronto Police Service (TPS) said they were called to West Deane Park Drive and Rabbit Lane at 12:39 a.m. in Etobicoke. There, they said they found four men inside a vehicle that had been shot up. Two of the men, Nasurdin Nasir, 26, and Terrell Carr, 24, were pronounced dead at the scene. The other two were taken to the hospital in life-threatening condition."