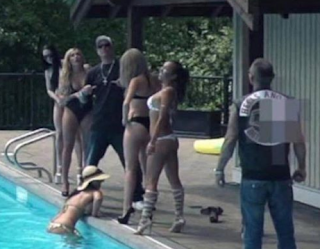 A lot of people have been very interested in this new video of HA associates trashing Madchild. I think Stiff Gritty has potential. His reference to Madchild carrying around a stuffed animal like a Yaletown slut was rather amusing. His reference to Madchild being a GHB predator nailed it. One has to remember who sold him the GHB but it is good to recognize that being a GHB predator is not a good thing. Tupac Shakur left us with the Ghetto Gospel after he died.

Tupac made reference to a homeless lady and another woman addicted to crack then said, "Tell me do you see that old lady, Ain't it sad, Living out of bags, Plus she's glad for the little things she has, And over there there's a lady, Crack got her crazy, Guess who's giving birth to a baby, I don't trip or let it fade me, From out of the fryin' pan, We jump into another form of slavery."

In another song called Changes Tupac responds to a crack dealer who said "I made a G today," then said "but you made it in a sleazy way Sellin' crack to the kids." Tupac didn't have a problem with pot, he had a problem with crack cocaine. So do I. We both saw what it does to people.

Trailrunner said that no one in the Madchild Diss video will ever amount to anything. Aside from being a tad harsh, I don't believe that is true. I think they all show potential. Speaking out against being an oxy junkie and a GHB predator shows potential.

Stiff Gritty's manger has a reputation for being a good guy. He sold pot in high school and was fair in his business dealings. No one cares about pot. It will soon be legal. Crack, fentanyl and crystal meth are the drugs that are killing society.

I would however caution them as to what they aspire to. The young girls in bikinis at the pool in the video look like normal girls who were simply their friends from high school. I dont want to be mean but the girls sitting on the bed in lingerie kinda looked like strippers or prostitutes. There isn't much of a long term future in that and I'm not sure that is where you want some of your female high school friends to end up.

We all know the pattern. First they recruit the girls to be strippers and invite them to parties where its all about strippers and blow. Then they get them hooked on harder drugs and get them working in the sex trade industry to pay for the drugs. After the drugs eat them alive and they can no longer make money in the industry they end up dead on the Picton Farm.

Jesse Hadden is a good guy. The after hours he ran across the street from the Pickton farm was fine. People would go there after Roosters closed. Piggy's Palace down the street was not. The members involved in that dive are pieces of garbage. They weren't just GHB predators, they would gang rape crack hos and kill them for drug debts.

Watch your ladies. Be careful what happens to your young female friends you introduce to club members. Make sure they don't end up crack hos dead on the Pickton farm. That wouldn't be loyal to your friendships. The reason why the old men on Viagra want you around is so you can bring young girls around their daughters age so they can sleep with them. Mind how you go.

Snak the Ripper also has potential. Repping the Stop down crew yo. I'm not saying we should all jump on the bandwagon and trash Madchild for being a b*tch. Like Fat Joe, his response to 50 Cent was a one time one time only. Fat Joe just set the record straight then moved on to other things. Likewise, these young guns can move on to other things after setting the record straight.