The Good Place: Don't miss it 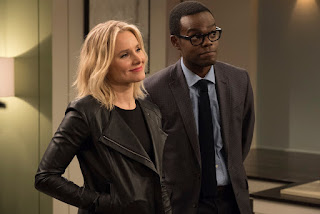 On the lighter side, there's a funny TV series on Netflix called the Good Place. The first season is on Netflix but the second season appears to be on TV. I don't normally watch much TV because there isn't normally anything worthwhile on but I found this series amusing like Lilyhammer.

It's about a self absorbed woman who dies and goes to the good place by mistake. There's no mention of heaven or hell. Just the good place and the bad place. It's not religious. In fact most people who are religious might find it a bit offensive but I personally thought it was hilarious.

It's about two couples who get placed together as soul mates. Kristen Bell plays Eleanor, a feisty streetwise hustler always looking out for number one. She gets paired up with an ethics professor played by William Jackson Harper. A solid brother who does a great job playing a nerd. When she confesses to him there has been a mistake and that she isn't the wonderful person everyone thinks she is, he ends up giving her lessons on ethics to help her become a better person so she doesn't get kicked out and end up in the bad place where there is a lot of horror and screaming.

The other couple consists of a rich do gooder played by Jameela Jamil and a Buddhist monk played by Manny Jacinto. Only our Buddhist monk isn't really a Buddhist monk. He just assumed that cover because he too was there by mistake. He was actually a drug dealer from Florida. 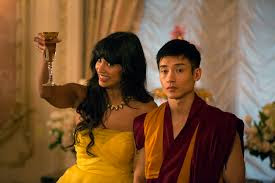 The season finally to the first season was the surprise kicker that put everything into perspective.

It was light. It was funny. It was worth watching.