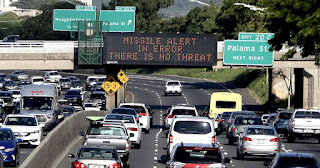 The BBC is reporting that "It was a mistake by an employee at Hawaii's Emergency Management Agency (EMA) who "pushed the wrong button" during procedures that occur during the handover of a shift. Mobile phone users received the message at 08:07 (18:07 GMT): "Ballistic missile threat inbound to Hawaii. Seek immediate shelter. This is not a drill." The alert was corrected by email 18 minutes later but there was no follow-up mobile text for 38 minutes, the Honolulu Star-Advertiser reports. The alert system is in place because of the potential proximity of Hawaii to North Korean missiles." This is taking the term fake news to a whole new level.

It shows why we need to step back from military action in North Korea at this time. Defending freedom is noble. Provoking war in a time of peace is not. The Pentagon loses billions of dollars from it's budget every year. That is organized crime. The most proactive way to deal with a missile threat is by building Iron dome missile defense systems not by provoking mass hysteria.

China and Russia are speaking out against a joint US Canada summit on Korea hosted in Vancouver this week for good reason. It will indeed do more harm than good. It is in fact a farce.

The Vancouver summit "is expected to put a heavy emphasis on finding ways to crack down on the many smuggling and money-laundering schemes that Pyongyang has employed to sidestep sanctions and pay for its nuclear program." AYFKM? Canada is to blame. They are selling Communist China CANDU reactors which gives them the materials and the technology to make and export nuclear missiles. Instead of provoking war by boarding foreign vessels they need to stop selling China Canadian nuclear reactors. It's as simple as that.

You want to know who is financing North Korea's nuclear missile program? WE ARE. Every time we fill up with gas at the pumps thanks to Stephen Harper who gave the monopoly on our oil rights to Communist China. Fixing that the way Norway did would be a lot simpler than provoking a war that we created. Excessive sanctions after the first wold war caused the second world war.

The best way to ensure a peaceful Winter Olympics is by inviting North Korea.

We need to be more concerned with confronting organized crime here at home. 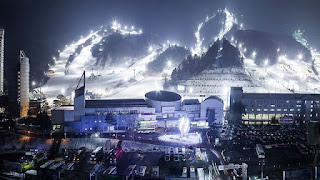 Posted by Dennis Watson at 6:42 AM