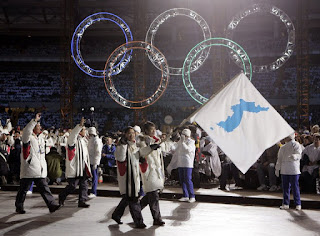 The BBC is reporting that "North and South Korea have agreed to march together under a single 'unified Korea' flag at next month's Winter Olympics in the South. They also agreed to field a joint women's ice hockey team in rare talks at the truce village of Panmunjom. These are the first high-level talks between the countries in more than two years. It marks a thaw in relations that began in the new year when North Korea offered to send a team to the games. The games will take place between 9 and 25 February in Pyeongchang in South Korea."

The New York Times posted a picture of North and South Korean athletes marching together during the opening ceremony of the 2006 Winter Olympics in Turin, Italy. J'imagine yo.

Canada needs to stop selling China nuclear reactors and needs to take back it's oil rights. We are the ones supporting North Korea's nuclear expansion through China. SNC-Lavalin is the most corrupt construction company on the planet. Word.