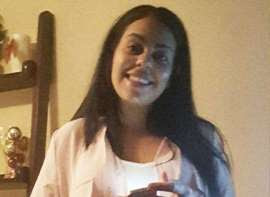 Metro News is reporting that "Hope of family and friends that Holly Hamilton would be found alive came to a tragic end Wednesday, with the discovery of the 29-year-old woman's body. Hamilton police homicide unit Staff Sgt. Dave Oleniuk confirmed Hamilton's body had been found and that she is the city's first homicide victim of 2018. One man has been arrested in connection with her death, he said. But police have not yet released his name or any information on charges."

CBC is reporting that "A man has been arrested in connection with her death, police said, adding that the investigation is still ongoing." Metro News reported that "Detectives had been looking for Hamilton's 30-year-old ex boyfriend, including searching and canvassing in the neighbourhood around his Barton Street East and Fairfield Avenue apartment - the last place Hamilton was seen on Sunday night. She was found along with her white, four-door Ford Escort in an east Hamilton parking garage."