Doctor murders his wife to cover up opioid ring 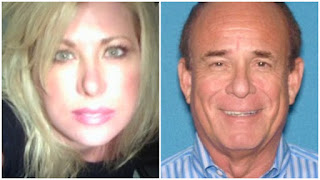 Time magazine is reporting that "A New Jersey doctor running an illegal prescription opioid drug ring with a motorcycle gang had a member hire someone to kill his wife after she threatened to expose the scheme while trying to force him to agree to a divorce, authorities said Tuesday."

The Washington Post is reporting that "Dr. James Kauffman, 68, of Linwood, a small town outside Atlantic City, was arrested and charged with first-degree murder more than five years after his wife, local radio host April Kauffman, was found dead inside their home. An alleged co-conspirator, Ferdinand Augello, 61, also faces first-degree murder charges. The Atlantic County prosecutor’s office, which investigated the case along with the Federal Bureau of Investigation and other agencies, said James Kauffman and Augello presided over an illegal opioid network that was run out of Kauffman’s office through an alliance with the Pagan Outlaw Motorcycle Gang." News 1130 is reportng that Kauffman’s license was suspended after his arrest.

Just like Macklemore said, My drug dealer was a doctor. One has to wonder if this bust is being prosecuted because he was tied to a rival. Face the fraud.