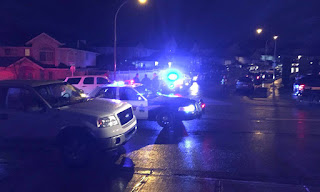 The Surrey Now Leader is reporting that "A man has been killed in a shooting tonight in Abbotsford. The incident took place at about 6:30 p.m. on Promontory Court just off of Ridgeview Drive in west Abbotsford. The victim was shot while he was in a vehicle."

Tom Zytaruk from the Surrey Now Leader claims "Drive-by shootings have become a part of our social fabric here in the Lower Mainland." Why is that? Because the police have stopped enforcing the law when it comes to street level drug trafficking. As a result the criminals are shooting each other to fight for the profits from that illicit gold mine our apathy has created.

Update: CTV is reporting that the victim in the Abbotsford fatal shooting was Lovepreet "Jason" Dhaliwal. "According to IHIT, Dhaliwal was trying to leave a criminal lifestyle."

Posted by Dennis Watson at 9:58 PM