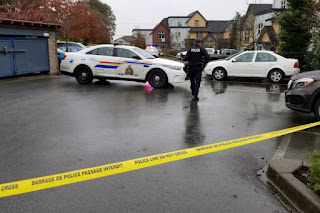 Global is reporting that "RCMP are investigating a deadly shooting in Nanaimo on Saturday morning. Officers were called to a housing complex at the intersection of Wakesiah Avenue and Second Street just before 11 a.m., Mounties said. An adult male was found dead in the parking lot. Police said the man was known to police and they believe the shooting was targeted. The victim’s identity will not be released until next of kin are notified."

"Police said they are also investigating a vehicle fire reported shortly after the incident, which may be related to the shooting."

Update: The Nainamo buletin is reporting that "Nanaimo RCMP released the name of the person killed in yesterday’s shooting as they continue to investigate the crime. Nanaimo man Troy McKinnon, 34, was shot and killed Saturday morning in the area of Wakesiah Avenue and Jingle Pot Road."