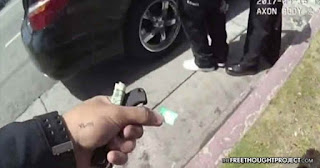 The Activist Post is reporting that "A Los Angeles man has escaped serious charges after being exonerated by police body camera footage which showed officers planting a baggy of cocaine into his wallet." CBS2 New released the body cam footage and Complex News on Youtube picked up on the story.

Although this incident happened in LA, the land of the Rodney King incident, the same thing happened in Toronto. 4 Toronto cops were accused of planting heroin on a suspect and they got off due to trial delays they created. The "crown" simply withdrew the charges.

Posted by Dennis Watson at 2:45 PM