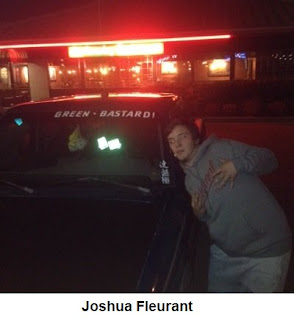 Global is reporting that "Three men have now been charged in the death of a 20-year-old man from Alberta last year. The body of Michael Bonin, from Rycroft Alberta, was discovered on a rural forest service road north of Hope, B.C. on April 20, 2017. This past weekend, the Integrated Homicide Investigation Team (IHIT) and partner agencies arrested 26-year-old Ryan Watt, 20-year-old Joshua Fleurant and 27-year-old Jared Jorgenson. All three have now been charged with first-degree murder, and will appear in a court in B.C. on Monday."

In 2015 Castanet reported that Joshua Fleurant was arrested in a Kelowna car theft ring. Johnny Newcome was busted in Kelowna for a huge stolen car ring tied to the HAs. CBC is reporting that Michael Bonin was a native of Prince George. We know the HAs control the drug trade in PG.

Kamloops Info News is reporting that the three men charged in Micheal's murder will be appearing in Kelowna court. "Fleurant also appears to have known Bonin. They were both charged with theft of a vehicle from Kamloops among other charges."

The 15 year old bystander hit in a Vancouver shooting has died.