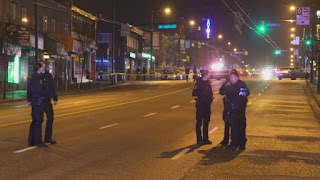 The Peace arch News is reporting that "Three people have been sent to hospital following a shooting in Vancouver Saturday night. In a news release, Vancouver Police said they responded to a reports of shots fired near East Broadway and Ontario Street shortly after 9 p.m. Police found three people injured. A 15-year-old Coquitlam teenager driving by the area was sent to hospital with serious injuries. Police believe that a man in his 20s, who received life-threatening injuries, was the target of the shooting. Another man in his 30s was treated for minor injuries and then released." CBC is reporting that the 15 year old was a bystander.

Global is reporting that "BC Coroners Service says a 15-year-old boy from Coquitlam who was an innocent bystander, struck by a bullet during a shooting Saturday night, has died. The teenager was inside a car driving by when shots rang out just after 9 p.m. at Broadway and Ontario Street."