When Niagara Falls freezes over 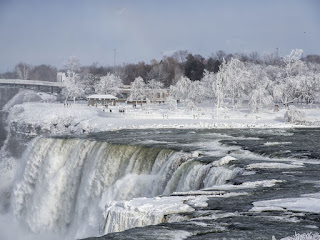 You know it's cold when Niagara Falls freezes over. Only they haven't frozen over, they're just starting to ice up along the edges. It is however, very cold on the east coast. I could never ride a full season in that. We've been experiencing a fairly mild winter on the west coast of Canada with temperatures hovering around zero degrees celsius. In Eastern Canada they've been hit with cold arctic air while Alaska is getting warm air. Go figure. A shift in the polar vortex yo.

CTV is reporting that "Anchorage, Alaska, was warmer Tuesday than Jacksonville, Florida. The weather in the U.S. is that upside down. That's because the Arctic's deeply frigid weather escaped its regular atmospheric jail that traps the worst cold. It then meandered south to the central and eastern United States."

New Brswick has a weather warning but the "snow hurricane" seems to be over exagerated. "On Thursday evening the snow will change to a mixture of freezing rain and ice pellets and finally to rain over easternmost regions." Things are starting to warm up a bit in Montreal as well.