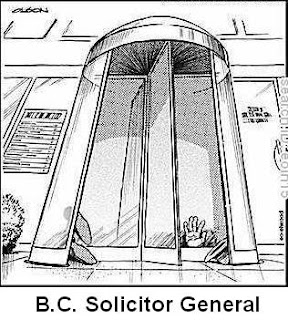 Well Kash Heed does it again. B.C.'s Solicitor General resigned while he was being investigated for election fraud. He's cleared, then is reappointed to the post only to resign again hours later when it turns out the special prosecutor that cleared him was a donor to his campaign.

This is really bizarre. As much as I despise Gordon Campbell I personally don't see the Kash Heed scandal as being much of a scandal. After all we have a drunk driver for a premier who just made stiffer laws against drunk driving. He lowered the blood alcohol level that deems over the legal limit.

So Kash Heed's office sent out a nasty campaign flyer full of stereotypes against the NDP. Nothing earth shattering there. The NDP candidate complained at the time and we heard about it during the election. I don't know why it made big news when he became SG. Gordon Campbell lies all the time.

However, if he wanted to take a hard on crime stance during the election, he should follow through with it. Unfortunately, that would be wishful thinking. Gordon Campbell campaigned against the gold plated pension when he was running for office then implemented it as well as two large pay raises amid devastating budget cut backs after he was elected.

Gordon Campbell also campaigned against the HST and we can all see where that went. He rammed it in stating he would not recognize a petition calling for a referendum on the HST. Can you say Brian Mulroney? No one seems to care about the Gordon Campbell scandal(s). Not to mention B.C. Rail. Much.

The last Solicitor General, John van Dongen, resigned over another "scandal". He had too many speeding tickets. I really didn't see that as a big scandal either. Of all the limp fish in Gordon Campbell's party, van Dongen was doing a good job. Dave Hayer is one of the other few I trust in that party but it's kind of like Carol James' challenge.

Carol James is a wonderful person and a competent leader. I trust her a million times more than Gordon Campbell. However, I don't trust everyone in her party. Bruce Ralston, Mike Farnworth and Penny Priddy are all standing up against crime. I'm not so sure about all the others. However, it would clearly appear that the B.C. NDP would be much better on crime than Campbell's liberals.

Let's just hope that Gordon Campbell will go down in history like Brian Mulroney did and have his party wiped off the face of the earth as he's replaced by a balanced coalition of Bill Vandersalm and Carol James. Isn't that an ironic combination? Personally, I think it would be a good balance between the extremes.