David Loiseau to fight in Vancouver for UFC 115 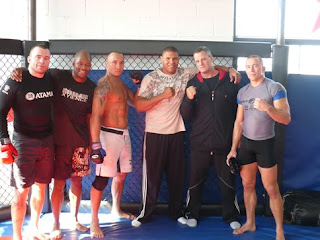 Well, David Loiseau's suspended license was indeed temporary after his RCMP record check came back clean and is now set to fight in Vancouver for UFC 115. Quebec denied his license until a criminal record check came through because of his involvement in XMMA which appears to have ties to a criminal organization.

It doesn't change the fact that the company he sold, XMMA, was later run by Hells Angel associate Burton Rice. Rice was arrested with the new Montreal Hells Angel president Salvatore Cazzetta. Police claim they used the Rice compound to traffic contraband cigarettes and crack cocaine.

Make sure you send in your photos of Bob Greene and the east Van Hells Angels at UFC 115 in Vancouver. Sounds like it'll be a great show. Maybe Randy Jones will show up with his pal Russel Peters.