in 2008 three men were arrested in a triple slaying in Winnipeg. Police claim all of the suspects were involved with gangs but they do not believe the shooting victims had any gang involvement. McCaskill said he believes it is an isolated incident and urged the public not to worry.

The shooters were all involved with gangs but the victims weren't. And why is that not a concern for the community and for public safety?

It was the first triple homicide in Winnipeg since the triple murder on Semple Avenue in 1996 also involving gangs.

In 1996, three men were shot, execution-style, in a Semple Avenue home in West Kildonan.

The slayings were part of an ongoing battle between members of the Manitoba Warriors and associates of the Hells Angels over control of the drug and prostitution trades.

Two men were convicted of first-degree murder in the case and sentenced to life in prison, with no chance of parole for 25 years.

Looks like the Hells Angels have been involved with murder, drugs and prostitution in Winnipeg for many years now. 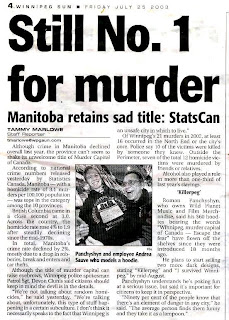