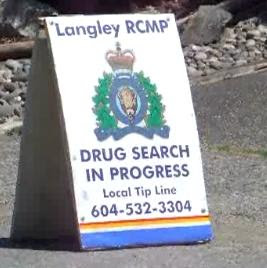 I find these numbers amazing. On May 6 2010 the Langley Times reported that the Langley RCMP claim they investigated 153 grow ops in 2009 and only charged 16 people. Now I'm not saying more or less people should be charged. I'm saying that is a huge number in relation to the size of Langley.

That's over 12 a month and almost 3 a week for every week and month of the year. We can argue about the legalization of pot until the cows come home. The fact is, that is a huge number. That's not even touching on Surrey or Vancouver where one would assume the numbers would be much larger.

Part of the problem comes from legalized medicinal marijuana grow ops. For some bizarre reason the Federal government will not let the RCMP know who has legal grow ops. So if they get a tip on a grow op, bust the grow op and find out they were one of the ones that were legal, they could get sued for damages. Now that is absolutely insane.

Then we have the problematic nature of legal grow ops in itself. Stealing Hydro and creating fire hazards as well as becoming targets of violent grow rips. Then they commonly abuse their license and provide for much more than medicinal markets. One medicinal marijuana grow op in Pentiction was caught with guns as well as providing for more then the medicinal market. Then there's the violence involved when Hells Angels take over grow ops.

Now we read of how Surrey has adopted a policy of using the fire department, bylaws officers and the police to post warning signs on suspected grow ops. Delta rejected the proposal saying they prefer grow ops to be raided with arrests made because posting warning just allows them to relocate. However, doing something as opposed to doing nothing seemingly has seen an 80% decrease in grow ops in Surrey.

So basically the situation is a mess. The Federal government not communicating with the RCMP is insane. The number of both legal and illegal grow ops is staggering. The conservative government used the argument of wanting to provide more bang for their buck in provide health care aid and what serves they will and will not pay for.

Likewise we can see two things in B.C.'s real world. The drug related violence is staggering as is the number of grow ops. Yet logic dictates there is a huge difference between smoking pot and smoking crack or meth. Without legalizing pot we can still draw a line in the sand and create mandatory minimum sentences for selling hard drugs. Mandatory minimum sentences for SELLING hard drugs not for USING hard drugs. Even if the person is selling a small quantity.

Locking everyone in jail who smokes a blunt or grows a plant has become fiscally irresponsible. Yet the prolific amount of crime that hard drug users commit to pay for their habit is staggering as is the profits the gangs make supplying them. That is what the murders in the gang war are about - greed and money.

We can't do everything but we can do something. Legalizing all drugs is socially irresponsible as is the fiscally irresponsible quest of supplying addicts with drugs. Buying an alcoholic alcohol is just plain irresponsible. And since our emergency wards have horrific lines and our wonderful medical system is grossly over burdened, we need to be more responsible in determining what medical services we will cover and what we will not. Feeding addiction is not fiscally responsible.

So draw the line and get rid of the crack and meth. Deal with that first. Fund it with criminal organization legislation seizing the proceeds of crime. This would greatly increase public safety.