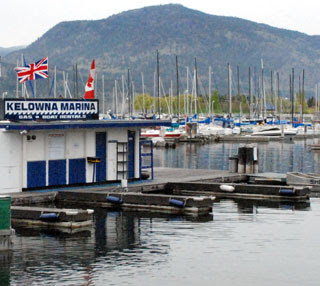 Around noon today, workers in Kelowna replacing decking at a marina at the foot of Queensway found a body floating under the dock. It has yet to be determined whether the body is that of a male or female, however, police believe the body has been in Okanagan Lake for some period of time.

Everyone is wondering if it is Geoff. Either way it's a sad discovery. Kinda like all those human feet washing up on shore around Vancouver. It brings a solemn feeling to a beautiful lake.

In 2007 there was a major drug bust at the same Kelowna Marina. During that four month investigation, six kilograms of cocaine were seized along with more than 400 tablets of ecstasy and $70,000.00 cash.

That case is finally going to trial and has recently cleared it's last hurdle. It comes as no surprise to discover that cocaine ring was tied to the Hells Angels.

At first we were told by the police that none of the accused had any affiliations with the Hells Angels but in April of this year the trial revealed that in another call between the two men, Fraser phones Herrick and orders him to “bring some s**t” to “the clubhouse.” With loud music in the background, Fraser tells him the address is 837 Ellis Street, the property known locally as the Hells Angels clubhouse.