Victoria public drug use out of control 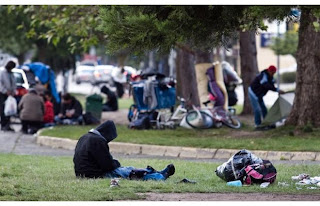 So what can we do? Well, fist step is to get involved in civil elections and elect people like Larry O'Brien and not reelect people like Philippe Lucas who thinks the solution to the problem is to hand out free crack pipes. Obviously, that is not working. You don't use tax dollars to buy alcohol for alcoholics. That is not in the addicts best interest and it certainly isn't in societies best interest.

I saw the problems in Victoria when residents were complaining that the needle exchange wasn't an exchange any more. The idea behind a needle exchange was an addict trades in a used needle for a new one in attempts to stop needles from ending up all over the streets and play grounds. Then some brain surgeon changed it to sheer distribution of free needles so used needles were being dumped everywhere at taxpayers expense. That is insane.

Then you have the problematic nature of enforcing drug laws when you have a needle exchange. You can't really charge someone for selling heroine if you are handing out free needles in that area so the drug laws aren't enforced. You sure can't arrest someone for using a needle the government just gave them for free.

And of course if you're letting people use and sell heroin in the area you can't really say heroin is OK but crack or meth isn't. So as soon as a needle exchange starts up the use and distribution of crack becomes rampant. Especially when they let addicts inject cocaine in the Vancouver safe injection site.

It is clear that these programs are not working. It is clear that addictions are increasing as is the crime associated with feeding a drug addiction. What we are doing is insane. We need to draw a line between pot and crack. Stop handing out free crack pipes. Needle exchanges are exchanges. If someone doesn't hand in a used needle they don't get a new needle.

We need to stop letting people smoke crack in public and we need to introduce mandatory minimum sentences for selling crack or meth and enforce them. It is really that simple. That is the New York model. I saw it work.

Homes not Drugs. That is social responsibility.