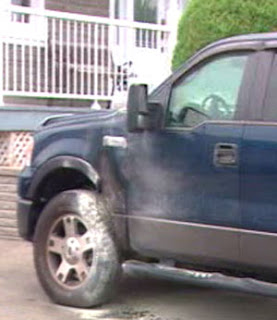 Yves Mercure, the new president of the construction wing of the Quebec Federation of Labour just had his pick up truck torched outside his home.

Jocelyn Dupuis, the former president was accused of fraud. The arrest was part of Operation Diligence, a probe that resulted in the arrests of several people in November who were allegedly part of a network created by Hells Angel Normand Marvin (Casper) Ouimet, 40, with the goal of seizing control of several masonry companies. Marvin is the guy that really needs to put his shirt back on: 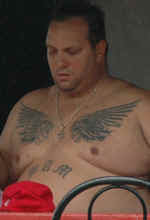 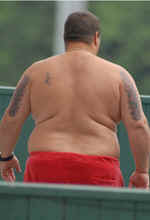 Marvin is still wanted on a Canada wide warrant. The fraud is one thing but the real issue appears to be the claim that the Hells Angels have taken over the construction industry in Quebec and made it part of an organized crime ring. Well at least they're branching out from selling crack and GHB. Unfortunately it looks like it's just money laundering for those drug businesses.