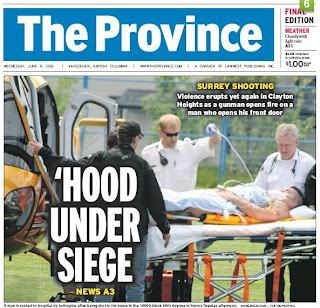 The cover of today's Vancouver Province reads: 'Hood under siege referring to another shooting in Surrey, this time in Clayton Heights. OK so they're going for the drama.

Nevertheless, the murders have started to spike again.

The Surrey Now ran a follow up article stating: Surrey neighbours stand by their 'hood'.