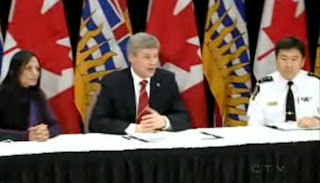 Harper met with local victims of crime and held a press conference about his introduction of anti gang legislation February 2009. He used Eileen Mohan as a human shield and double dared the opposition to oppose it given the public outcry during the Vancouver gang war.

Although I am cynical of all the political parties exploiting our misfortune, something needs to be done. After the meeting Steve Brown expressed frustration with the enormity of the task stating it's hard to know where to begin. Yet at another rally he spoke very clearly on what needs to be done. Judicial reform.

Eileen Mohan is right. We need to change the legislation and introduce mandatory minimum sentences that will bind the judges. Steve Brown is also right. Judges in BC make judgements that differ from the rest of Canada on the same existing federal legislation. Minimum mandatory sentences for violent crime is one step, making our bad judges accountable is another.

We have anti criminal organization legislation in place. The judges in BC will not enforce it due to corruption or stupidity. Those are the only two possible motives we are left with. Ontario and Quebec have a huge list of drug convictions for the Hells Angels. That has become their primary business. In BC if someone is caught selling cocaine for the Hells Angels they get house arrest. In Ontario they do real time because they are selling it on behalf of a criminal organization.

As a result those provinces have successfully applied their anti criminal organization legislation to the Hells Angels and every time they commit a criminal offence. BC has failed to do this. Part of the problem is Peter Leask a defense attorney who helped pedophiles get off. He was appointed by Paul Martin's government.

Yet Peter Leask is not the only bad judge here. They all think they are above the law and untouchable. The BC judges have absolutely no public accountability. Perhaps following the US model and electing judges would be a solution. Right now there is no mechanism in place to fire a bad judge.