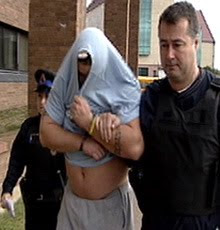 This is an old story but it comes to mind with the recent news of another drug bust in Newfoundland. Police in St. John's said Friday that as many as 10 of the 14 people arrested in drug raids on Thursday are associated with the Hells Angels biker gang, which is heavily involved in the illegal drug trade in Newfoundland and Labrador. Seemingly it's connected to Quebec and BC.

Posted by Dennis Watson at 3:01 PM