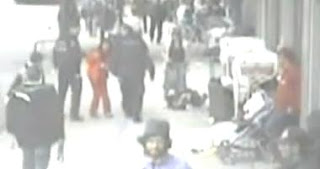 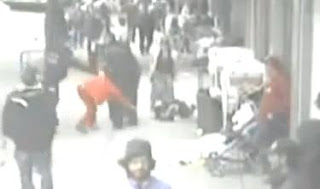 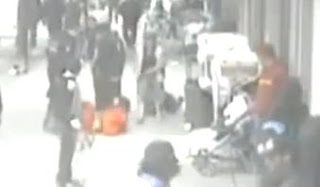 Well this is the video everyone's talking about. It was all over the news. I'm not going to try and rationalize what happened, just put it in perspective.

First, I don't think the woman swore at or was rude to the officers. Although there is no sound in the video, the body language says otherwise. Nor do I believe it looked like she was reaching for his gun. I think those claims are dishonest.

I will say that I think the police should definitely walk the beat in East Vancouver. Walking the beat in any high crime area is important and few forces do it. The RCMP tried it at Surrey Central but that was short lived.

I don't understand why they walk in threes. The RCMP did the same thing at Surrey Central. Two groups of two separated by some distance is far safer and covers a much larger area. Three tend to take up the whole sidewalk which is the case in the East Van video.

The street was busy, three large men take up the whole sidewalk. The woman with cerebral palsy limps when she walks. She was trying to walk past the police officers, was confused which direction to go and was pushed to the ground. Yes it's sad and disappointing. I think walking in pairs instead of threes would help.

Walking the beat for a police officer is not an easy thing. It is a daily challenge. The name calling and animosity are prevalent. Having a crack addict or someone with Aids bump into you with open sores and scabs is not a nice thing. Having anyone bump into you is unsafe as it could lead to be shanked in the back or simply poked with a dirty needle. The police need to establish a safe distance around them.

That does not include pushing disabled women to the ground. Although there are a lot of addicts in East Van, there are also a lot of disabled. If we spent more time getting rid of the crack dealers there would be a lot less social problems to clean up and sift through.

I will note that one media outlet claimed the police officer who pushed the disabled woman to the ground had only been with the force for one year. Clearly that is not the attitude needed to police anywhere not to mention East Van.

I've been thinking about this story and it's hard to get out of my mind. The fact that the other two officers did nothing speaks volumes. The fact that the VPD have this guy still walking the beat in East Van speaks volumes as does the other incident where two police officers beat the tar out of a guy in a domestic dispute call but got the wrong door and beat up the wrong guy.

Making a mistake and getting the wrong guy was bad enough but giving someone the boots and caving in his eye is really shameful. I remember arguing with an extremist about police brutality and he cited Pivot's submission on police brutality so I had a look. I thought to myself it was likely going to be filled with crackheads taking sh*t.

There clearly does seem to be a problem with arrogance and bullying within the VPD in East Van. Point granted they have to put up with a lot but do they really. I mean do they put up with it or do they take the bully approach and just don't take anything from anyone.

Pushing a disabled woman to the ground or beating up a crack addict really does nothing to earn respect in the neighborhood. It just perpetuates bitterness and abuse. Why don't they turn that anger onto the drug dealers? Yes it must be insanely frustrating to have to deal with insite and idiots who claim that free drugs is good science and heath care.

That is absolute nonsense and is a good part of the reason our city is going down the toilet fast. The free drugs experiment has failed miserably. The anti prohibitionists are just a vocal group of spoilt brats that throw temper tantrums demanding more and more. Those are the ones that should get their asses kicked. Not the addicts themselves. Those that profit from their exploitation.